Record Store Day is less than a month away. And you know what? We have too much fun planned to keep it contained to just one day. So we will also be celebrating The Day After Record Store Day as well!

We will celebrate Record Store Day on Saturday April 20th (the same day as the rest of the world) at our Villa Park location (22 S. Villa Ave., southwest corner of Villa and St. Charles Rd., inside Cornerstone Used Books) We will be there from 9AM ’til noon. We are trying to get as many exclusive Record Store Day releases as possible. Items are very limited, but we are doing our best. We hope you understand that we won’t be able to get everything on everybody’s wish list. We have placed our order with the distributor. What we wind up getting is a total crapshoot. So fingers crossed that we get what you’re looking for.

Also, we will be celebrating The Day After Record Store Day on April 21st at our Schaumburg warehouse (700 Albion Ave.) We won’t be able to bring all of our records to Villa Park, so we’ll just keep them where they’re at and open up on Sunday. We will be there from noon ’til 4:00 on Sunday. Big discounts on all items.

And we are very pleased to announce our special guest performer for The Day After Record Store Day will be singer/songwriter/producer Mike Viola. The name might not ring a bell for some, but you know his voice and you have heard his songs. He was the man behind the mic for “That Thing You Do”. Yep, that’s his voice on the title track of the awesome Tom Hanks film. He also wrote songs for “Walk Hard – The Dewey Cox Story”, “Get Him To The Greek” and all sorts of other film projects. He was leader of the band The Candy Butchers and has also released a bunch of stellar solo albums. If you’re a fan of pure pop songcraft, check him out. We are honored that he will be stopping by our HQ. His performance on Sunday April 21st in Schaumburg will begin at 1:00.

“Like” us on Facebook. We will be posting plenty of updates as the events draw nearer: https://www.facebook.com/CheapKissRecords 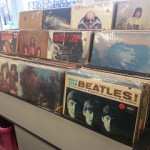 Besides our online store at cheapkissrecords.com, if you’re in the Chicagoland area be sure to stop by our Villa Park location as part of Cornerstone Used Books. It is located at 22 S. Villa Ave. (southwest corner of Villa Ave. and St. Charles Rd.) Open Monday thru Friday from 10-6, Saturdays 9-5, closed Sundays. Plenty of cool vinyl to flip through. Thousands of titles from $1 on up.